Nuclide has been built from the start to provide a great IDE experience for Hack development. Hack is a programming language for HHVM.

Currently, HHVM is not supported on Windows, so this integration has limited viability on that platform. However, work is being done to port HHVM to Windows.

In order to fully use the integration of Hack, you must have both Hack and HHVM installed on your system:

If you are planning on developing with Hack remotely, ensure HHVM and Hack are installed on the remote machine.

Hack’s integration into Nuclide provides you with productivity features such as:

If your code doesn’t correctly typecheck, Nuclide has code diagnostics that will show you the error. You can see the error in two places, inline within the Editing Area and in the Code Diagnostics pane below. 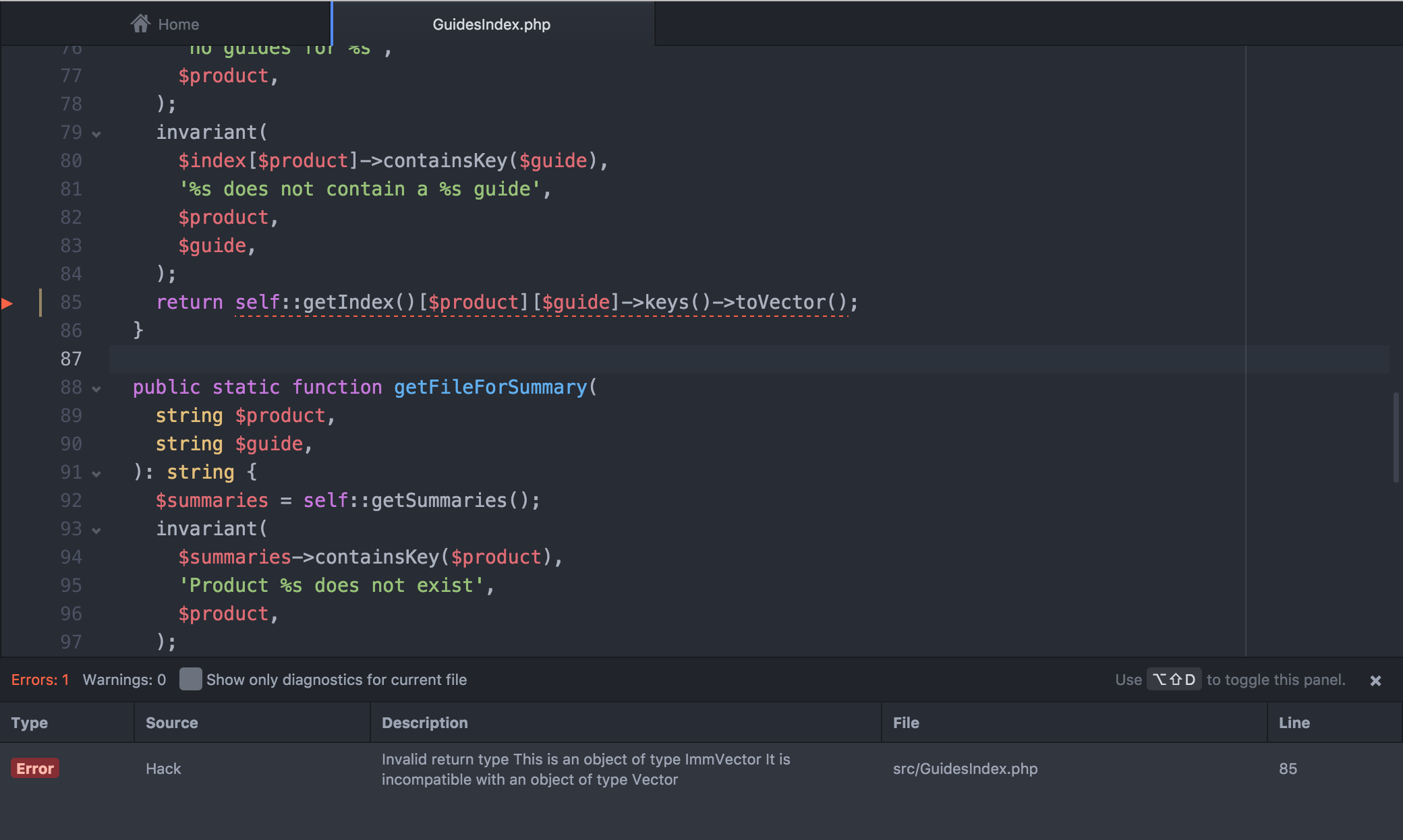 Hover over the sideways red triangle in the gutter to see the Hack error inline.

Given that Nuclide has access to all of the type information within your project and the built-in types provided by Hack, autocomplete just works.

Nuclide provides a jump to definition/symbol feature for Hack programs.

In order for this to work, you must have an .hhconfig file in the root of your project and a running hh_server monitoring the root as well.

For example, if you want to go to the definition of getPages(), hover over getPages() and either press Cmd-<mouse click> or Cmd-Option-Enter (Ctrl-Alt-Enter on Linux). 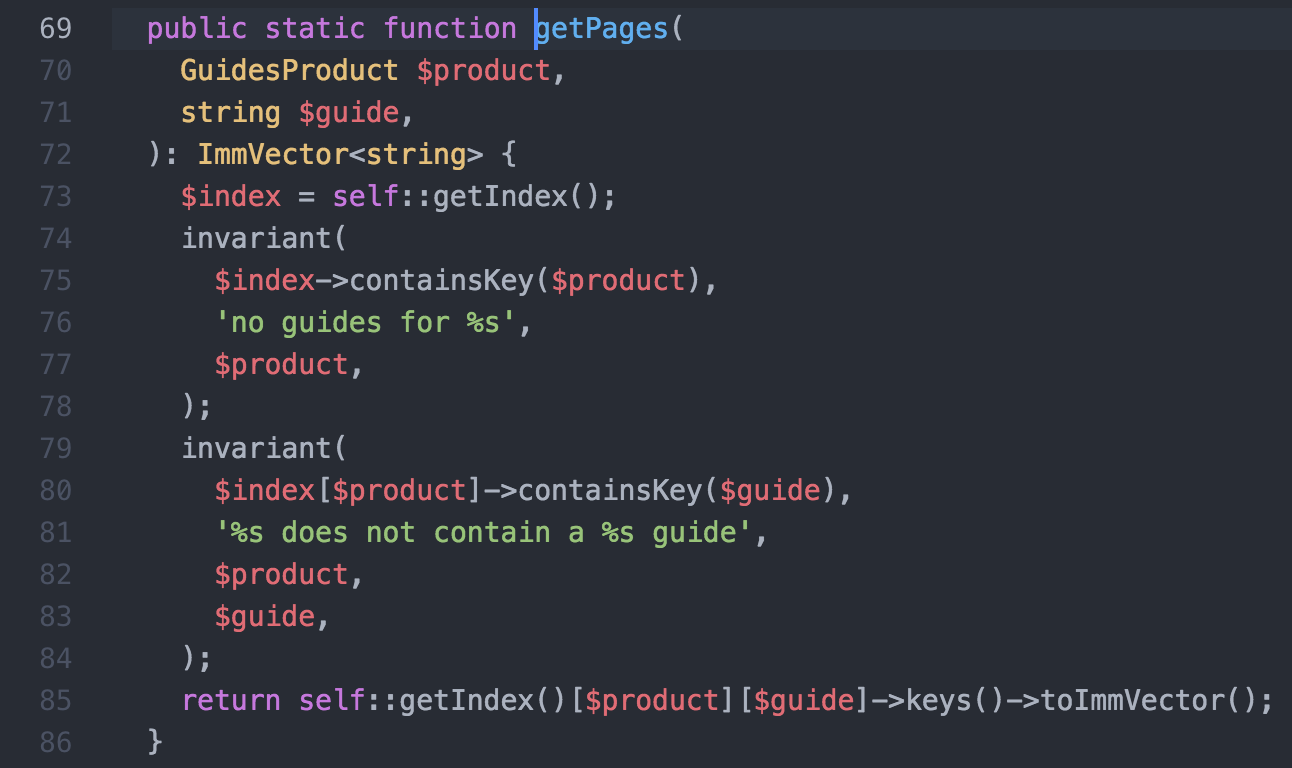 If you hover over a variable in your Hack file, you can get the type of the variable directly inline.

In fact, you can even pin that type hint so that it always displays. Just click on the pin icon when hovering over a variable to pin it.

The highlighted variables show that their type variables have been pinned. If you hover over the type hint, its associated variable will have motion in its highlight.

Click the x icon of a pinned type hint to remove it.

Pinned type hints can be moved anywhere within the editor.

Nuclide can show you how much of your Hack file is covered by the type system with Type Coverage.

If the percentage is less than 100%, you can toggle the Type Coverage inline display to show you where the issues are.

From the Command Palette, choose Nuclide Type Coverage: Toggle Inline Display. You can also either press Ctrl-Option-Shift-V (Ctrl-Alt-Shift-V on Linux) or simply click on the percentage displayed in the Status Bar.

Nuclide can take your Hack code and format it according to a built-in set of coding standards (e.g, two-space indents, bracket location, etc.).

For example, here is a bit of code that looks relatively haphazard from a formatting perspective.

Place your cursor inside the function and press Cmd-Shift-C (Ctrl-Shift-C on Linux) to apply the coding standards to the function.

To enable debugging Hack/PHP applications in webserver mode, you’ll need to add the following to your server’s config.ini:

By default, HHVM will listen for incoming debugger connections on port 8999. You can specify a different port by adding an additional line to your config.ini:

If you want to debug a Hack/PHP script running in script mode, you simply add a couple extra command line parameters when invoking HHVM:

The above command will startup HHVM with the debugger listening on the specified port, and will wait forever for the debugger to connect before starting the script. You can add an additional optional parameter, --vsDebugNoWait true to cause HHVM to begin execution of the script immediately, while still allowing the debugger to connect and break in later. This mode is especially useful for long-running scripts that you may want to break into to debug things like infinite loops, hangs, etc.

In order for Nuclide to be able to connect to your HHVM instance, you’ll need to either have Nuclide server on the same host as HHVM and use a remote project, or forward the HHVM debugger port to your local machine via SSH tunneling or some other means.

We strongly advise against exposing the HHVM debugger port to the internet on production machines, for obvious security reasons.

There are two configuration options in Nuclide settings that you’ll want to configure for HHVM if you want to launch scripts in debug mode. You don’t need to configure these if you only want to attach to a webserver.

The first is the full path to your HHVM runtime binary, and the second is any arguments Nuclide should pass when starting HHVM, such as the path to your config.ini. These arguments will be passed verbatim on the command line when invoking HHVM.

Additionally, you may specify an optional attach port to use when attaching to webserver mode, if you’ve configured your server to listen on a port other than 8999.

When launching, Nuclide will prompt for the path to your Hack/PHP script, and any arguments you’d like Nuclide to pass to it.

When attaching, Nuclide will offer to connect to your webserver instance, or attach to an already-running script that was started with the --mode vsdebug --vsDebugPort <port> HHVM arguments.

The console also provides a REPL that allows you to execute Hack/PHP code (see below).

Basic evaluation in the REPL works out of the box for built in Hack/PHP routines.

Nuclide now executes console input as Hack by default, instead of PHP. For many commands, there is no difference, but the behavior between Hack and PHP differs in some contexts, so this is important to know. You can explicitly have the debugger run your code as Hack or PHP by beginning your input with <?hh or <?php, respectively.

Note: if your input begins with <?hh or <?php, the debugger will execute whatever you type, verbatim, as a Hack/PHP script. It must therefore be a complete and syntactically valid script (including ending your statements with a ;).

When stopped a breakpoint, console commands execute in the context of the currently-broken-in request, at the location of the selected call frame and line. While the target is running, however, console commands execute in a global context that is not specific to any currently running request. In this context, you’ll probably want to reference things defined in your Hack/PHP application. It is therefore possible to have the debugger require or define things so that they are “in scope” for the console evaluation.